The History of Rancho Bernardo

The people we now know as the Kumeyaay Indians were the original inhabitants of what we today call Rancho Bernardo. These indigenous people had been on the local scene for approximately 2,700 years prior to the arrival of the first Europeans in 1769.

In 1769 a band of Spanish soldiers and Franciscan missionaries arrived in San Diego where they established a military headquarters, or presidio, along with a church, Mission San Diego de Alcalá, beginning the colonization process that would be repeated over the entire state.

Under Spanish rule, from 1769 to 1821, the land here in this part of San Diego County was under the authority of the missions. The mission fathers bestowed the names that appeared on the first written maps in the early 1800s. One such name that began to appear on maps at that time was a parcel of land about 25 miles north of the town of San Diego called, originally, “El Paraje O Cañada de San Bernardo.” In English, that means “The place or canyon of Saint Bernard.”

After Mexico won its independence from Spain in 1821, the mission lands came under the control of the new Mexican government, which offered massive tracts of land to anyone agreeing to settle on and work the lands.

Over the space of two years, between 1842 and 1845, the Mexican government granted the 17,763 acre Rancho San Bernardo to Don Jose Snook. Snook, born Joseph Snook in England, had been a sea captain commanding ships for merchants trading goods between ports in California, Mexico and Peru. Desiring to settle down in California and acquire land, Snook complied with Mexican government requirements of the time and became a Catholic and a Mexican citizen, choosing for his baptismal name Jose Francisco de Sales Snook.

In 1837 Snook had married Maria Antonia Alvarado, the daughter of a prominent San Diego family. Both of her parents could trace their ancestry to the original Spanish explorers of 1769. Maria’s father Juan Bautista Alvarado was a cousin to the territorial governor of the same name.

Snook stocked the ranch with herds of cattle, sheep, horses, mules and oxen. Contemporary writings described Rancho San Bernardo as one of the largest stock-raising operations in the region.

Then in 1846 Snook went to sea again. His voyage coincided with an escalation in tensions between Mexico and the United States culminating in the outbreak of the Mexican-American War in May. There are some indications that Snook’s ostensibly commercial voyages also included spying and supplying the Californios, those loyal to Mexico, in the fight against the Americans.

In December of 1846, while Snook was at sea, the Battle of San Pasqual took place on and around his rancho. It is considered the bloodiest and most controversial battle of the war. Nineteen U.S. soldiers and an unknown number of Californios lost their lives.

The war ended in victory for the United States on February 2, 1848, bringing California under the U.S. flag. Don Jose Snook died later that same month.

The Snooks had no children of their own; Don Jose left ranch real estate and buildings to his siblings, one of whom, John, had come over from England. He left his widow Maria a life estate in San Bernardo.

John Snook died in 1852. Maria Snook died in 1862. Ownership of Rancho San Bernardo passed to six Snook nieces and nephews in England. In 1867 they sold the rancho to Thomas Fox, representing the interests of James McCoy. 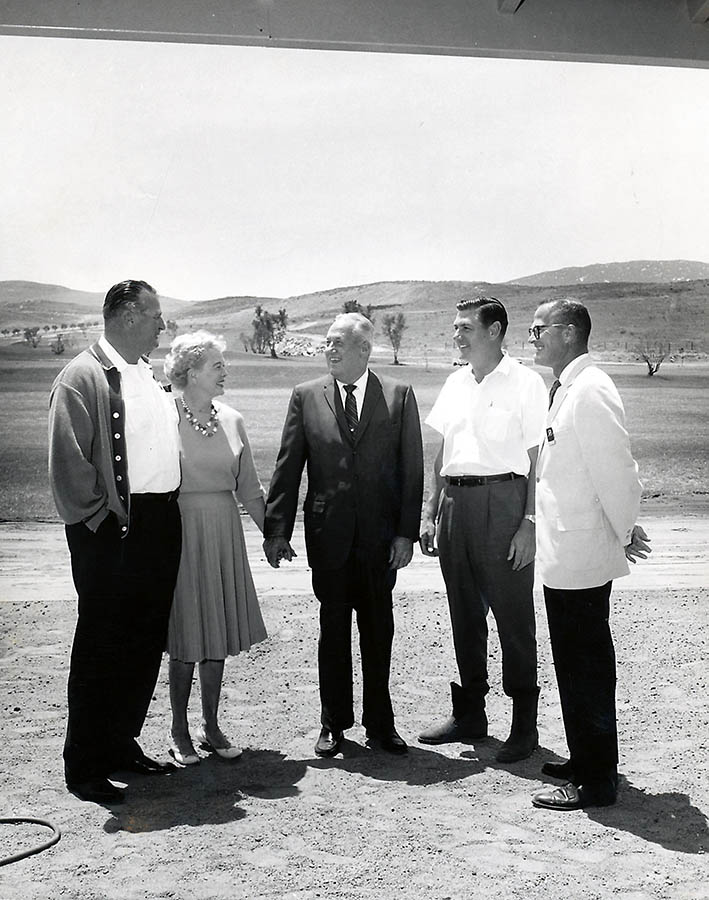 The sale to McCoy began a process of subdivision of the rancho. McCoy sold off parts of his acreage to three men, Sylvester Lyman, Omar Oaks, and Charles Wetmore. Lyman and Wetmore, in turn, subdivided their property into smaller ranches.

By 1872, with all the subdividing of San Bernardo going on, there were enough settlers in the area to require tri-weekly mail delivery and the establishment of a fourth-class post office which was given the name “Bernardo.” The first postmaster of Bernardo was Zenas Sikes. The Bernardo Post Office opened for business on December 3, 1872 inside his farmhouse.

Within a few years Sikes sold two acres of rancho land just southeast of his home to Patrick Graham. Graham erected a building on the property and opened a general store in partnership with Joseph Nugent.

The post office was soon relocated from the Sikes house to the general store. A blacksmith shop soon went up near the store. Other businesses followed, forming a village to serve the growing population of farmers and ranchers in the vicinity.

The town of Bernardo flourished for a time, then declined and disappeared by the early 1920s. Its demise was hastened by the growth of the city of Escondido a few miles north and the completion of the Lake Hodges Dam and Reservoir in 1919.

The biggest remaining unsubdivided portion of the old Rancho San Bernardo, about 5,800 acres, was owned by Ed Fletcher and then William Henshaw in the early 1920s. Then it passed to the San Diego County Water Company. In the late 1920s, the water company began leasing the property to George Daley. The Daleys were a pioneer ranching family in San Diego County who had large ranches in Escondido and Jamul by the time George began raising livestock and grain under lease on the San Bernardo property. George Daley bought Rancho San Bernardo outright in 1943.

When George Daley died in 1957 the ranch passed to his nephews, Donald and Lawrence. As late as the 1960s, the property was still rugged country, with more horse trails than auto roads.

In November 1961, developer Harry Summers and business partner W.R. “Fritz” Hawn announced a joint venture with Lawrence and Donald Daley to develop the ranch into a planned community to be called Rancho Bernardo.

The joint venture, initially named Rancho Bernardo, Inc., devised a master plan for a self-contained community offering housing, employment, schools, community and recreation centers. The community plan was submitted to the city of San Diego in late 1961 as part of Rancho Bernardo, Inc.’s proposal for annexation, the ranch at that time being unincorporated county land.

The first sales office for the new community opened in July 1962 at the intersection of Rancho Bernardo and Pomerado Roads. The first model homes erected represented the neighborhoods of Bernardo Greens, Bernardo Hills and Seven Oaks.

By February 1964 the new community had grown to 1,300 residents. By June of the same year, 2,000 people called Rancho Bernardo home.

Continuing development added new neighborhoods like Westwood in 1968 and Oaks North in 1971.  In 1982 AVCO ceded control over Covenants, Conditions and Restrictions for Rancho Bernardo to neighborhood community centers.

In 1984 AVCO ended its involvement in the community.

Vincent Rossi is a freelance writer whose work has appeared in newspapers, magazines, and online. He is the author of three local history books: From Field To Town, Valleys of Dreams, and The Lost Town of Bernardo. He also writes a weekly blog, The San Diego History Seeker. With his wife, Peggy, Vincent co-owns StorySeekers, a research and publishing company specializing in family history, memoir, and historical books.

Past Issues of “Historic Rancho Bernardo”